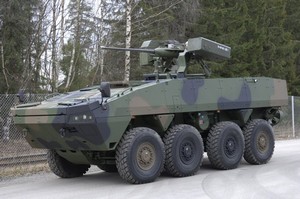 The Arjun Mark II, an upgraded version of the Mark I pictured here, will roll out by 2015, says Antony

Limited technical trials with some major and minor improvements on Main Battle Tank (MBT) Arjun Mark-I, as part of MBT Arjun Mark-II, have been carried out by the Defence Research and Development Organisation (DRDO) in the deserts of Rajasthan.

Defence Acquisition Council (DAC) has cleared the proposal for placement of indent for 124 Nos. of MBT Arjun Mark-II on Heavy Vehicles Factory (HVF), Avadi, Chennai. Placement of indent by the Army on Ordnance Factory Board (OFB) is being further processed.

The likely estimated cost of each MBT Arjun Mark-II with ail major/minor improvements will be approximately Rs.37 crore.

The first batch of MBT Arjun Mark-II is likely to be productionised by 2015.

This information was given by Defence Minister Shri AK Antony in a written reply to Shri Naveen Jindal in Lok Sabha today.