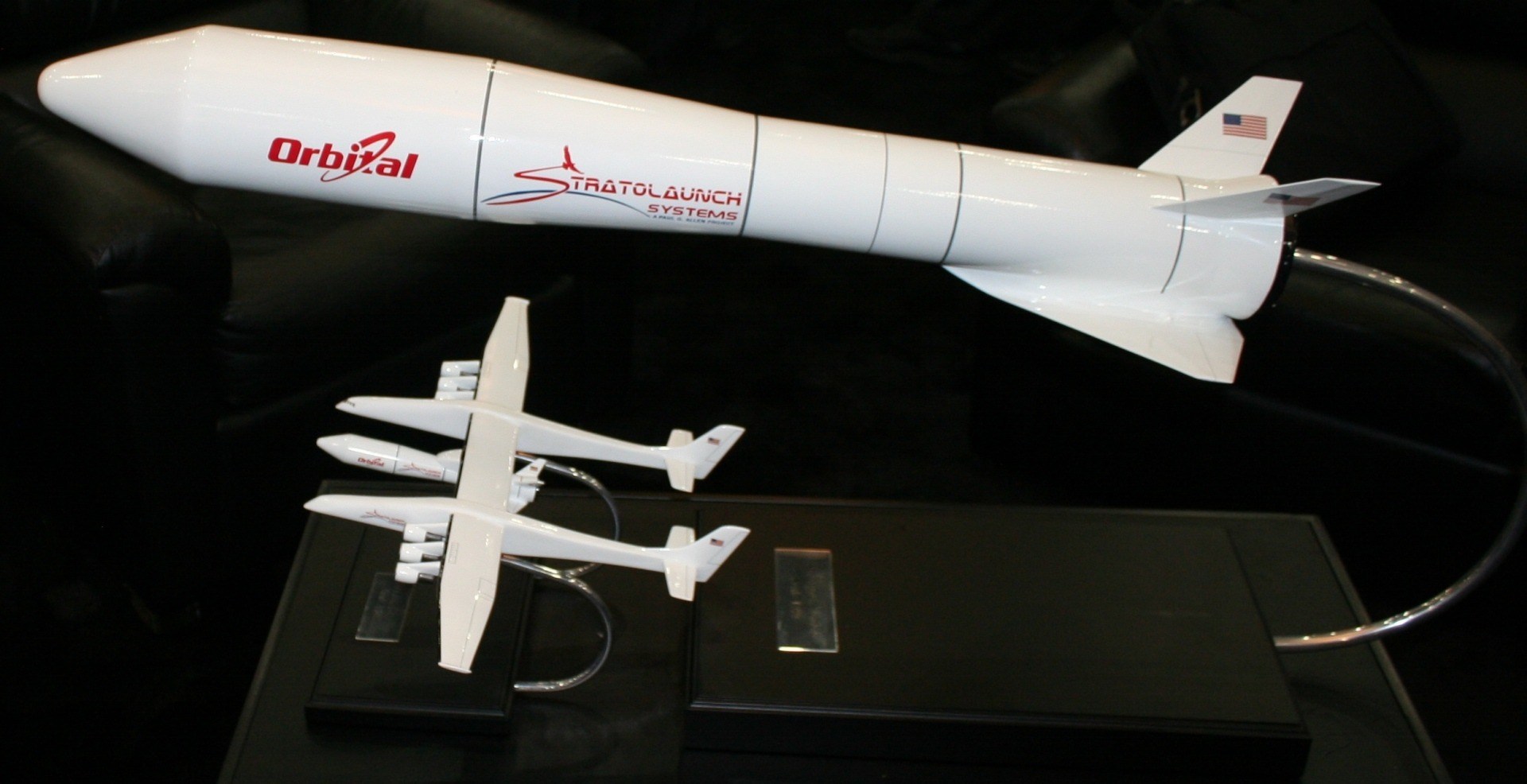 LOS ANGELES—Air launch space company Stratolaunch Systems has unveiled the first details of the range of vehicles it is developing for deployment from the very large carrier aircraft currently in the final stages of preflight testing at Mojave, California.
The launch vehicle family ranges from the previously announced Northrop Grumman Innovation Systems Pegasus XL to a fully reusable space plane which, the company says, will eventually be capable of carrying astronauts to low Earth orbit. This medium-class payload concept, dubbed internally as the “Black Ice” project, is still classed as a “design study.”

Stratolaunch’s initiative to develop its own family of vehicles and propulsion systems follows a series of discontinued development studies and agreements with other rocket and vehicle builders, most notably SpaceX and Orbital ATK prior to its procurement by Northrop Grumman. The company originally planned to air launch a variant of the Falcon 9, but parted ways with SpaceX in late 2012 after acknowledging the significant amount of redesign needed for the rocket. In 2015, Stratolaunch also ceased working with Orbital on the three-stage Thunderbolt, a proposed launch vehicle which was targeted at putting 13,500 lb. into a 220 nm orbit.

The Thunderbolt was designed to use ATK-provided solid rocket motors for the first and second stages, while the third was due to be powered by two liquid-fueled Aerojet Rocketdyne RL10C engines. In April 2015 Stratolaunch parent company Vulcan Aerospace indicated that, in the wake of the Thunderbolt project ending, it was broadening the scope of the project to enable the giant carrier aircraft to deploy several launch vehicle types.

Despite the Thunderbolt’s termination, Stratolaunch and Orbital established strong ties over the Pegasus, which in October 2016 was announced as the initial launch vehicle for the air carrier platform. Stratolaunch, which aims to make the first flight of the 385-ft., six-engine mother ship later this year, says the Pegasus XL will have the capability to launch just more than 800 lb. payload to orbit for a single or triple rocket configuration. “Integration and testing is ongoing with first flight in 2020,” it adds.

The development of the spaceplane, which was revealed as a design study earlier this year, appears to have been initiated following studies of a potential air-launched spaceplane project with Sierra Nevada in 2014. Unlike the scaled version of Sierra Nevada’s Dream Chaser lifting body which was originally studied for the role, the Stratolaunch vehicle is a conventional spaceplane design with an elongated fuselage, small, sharply-swept delta wings and canted twin tails. The configuration appears similar overall to Boeing’s X-37B Orbital Test Vehicle and the recently tested India Space Research Organization’s Reusable Launch Vehicle.

Stratolaunch’s concept, which in the graphic carries the designation “PGA 153”—believed to be a reference to the January 1953 birthdate of company founder and chairman Paul G. Allen—is designed to provide “advanced in-orbit capabilities and cargo return,” the company says. Although initial designs are optimized for cargo launch, a follow-on variant will be capable of transporting crew, it adds.

Commenting on the enhanced launch flexibility which Stratolaunch aims to provide with the broader family, company CEO Jean Floyd says “whatever the payload, whatever the orbit, getting your satellite into space will soon be as easy as booking an airline flight.”